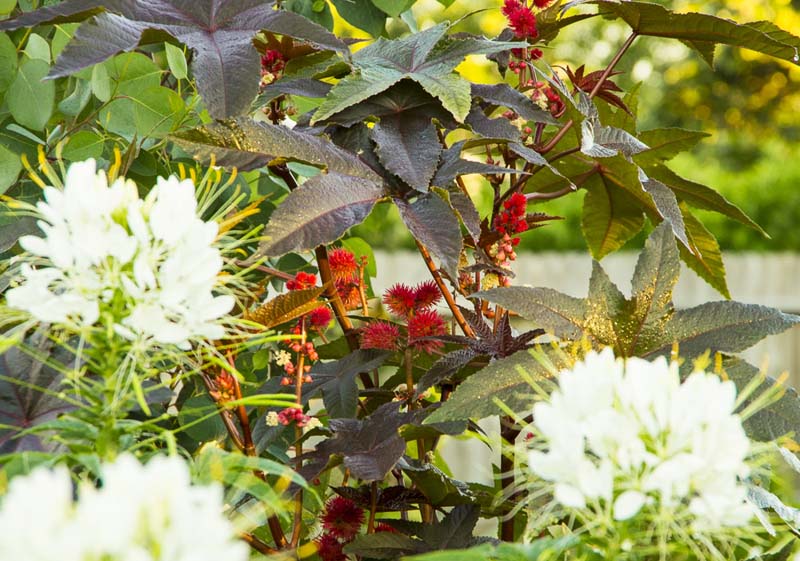 Want some fast-growing tropical lush in your garden?

Last spring I sowed five Castor bean seeds of the type Gibsonii. They grew almost unattended. And when I say grew that is quite an understatement of how they developed to small trees in a couple of months time. They were so exotic and stunning and made the whole garden look a lot more grown-up and finished than it was.

I gradually had to cut down all during the autumn, because I had hugely underestimated their growth potential compared to the space they had at their disposal. But that was ok because I saw that they were self-seeding around the garden.

The seed plants are easy to recognize because of their big leaves and purple stems. Here they have taken the space from some Cosmos I have sown.

I let a couple of self-seeded plants grow up this winter together with a lot of white Cleome. And the winter here in Houston was mild with no heavy freeze so the plants look beautiful together now at the start of April when not a lot of the flowers and shrubs has “taken off”.

It seems that it loves the hot summer sun here, it can take some drought, and doesn’t seem to be affected by nearby standing plants at all.

I experienced quite the opposite, and when a branch of my highly beloved (and small and frail) Purple-leaf Mimosa (Albizia julibrissin ‘Summer Chocolate’) withered and died, I whacked down the Castor-bean bush/tree who had harassed the Mimosa without a second of regret.

The castor beans big leaves and heavy, fast growth makes them in need of some support in the form of a bamboo stick if heavy wind occurs where you live. 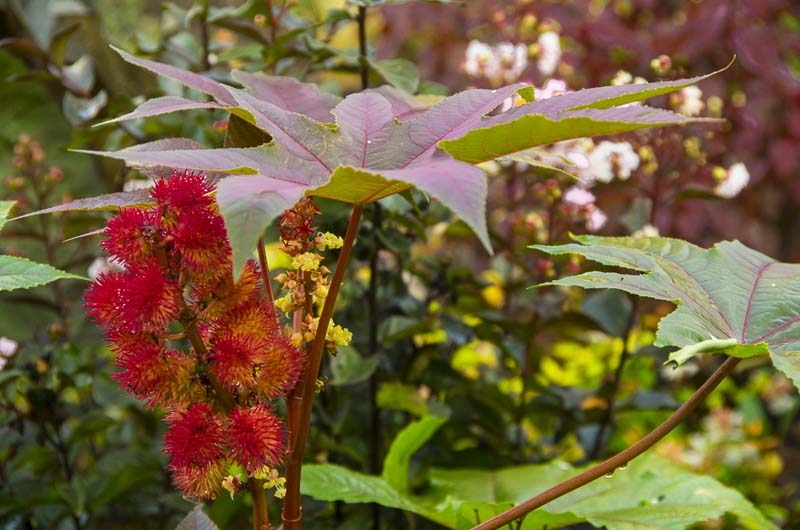 The leaves and seedpods are really beautiful. There are several types of Castor bean. Some with green leaves, dark red ones and some dwarf species. 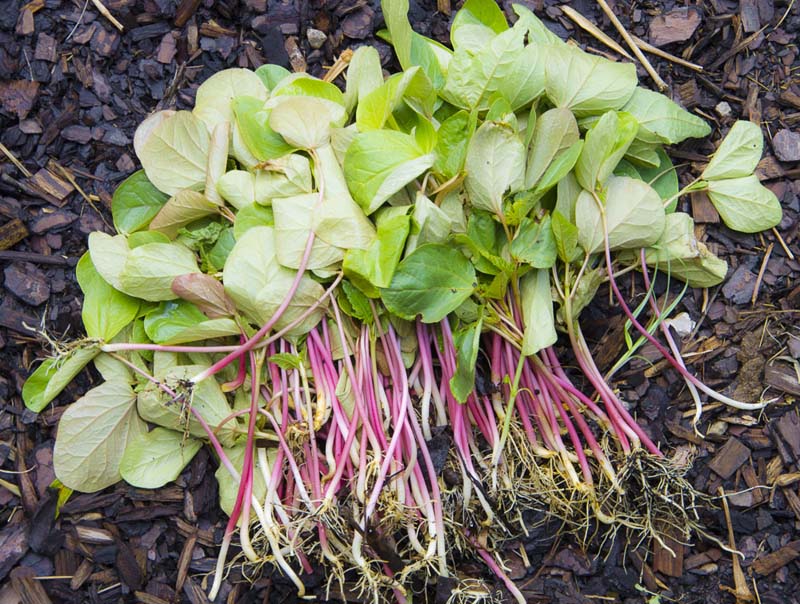 Although the castor plant is a heavy self-seeder, the seed plants are easy to recognize and remove.

I’m not really concerned about what is poisonous and dangerous in my garden. I take it pretty much for granted that people do not go around chewing on anything without at least asking.

BUT I would not have had the Castor-bean with its attractive small red spaceship-fruits and the big, shiny black speckled seed in the garden with small children. For that is Castor bean too poisonous.

In 1978 a Bulgarian writer and dissident was assassinated and died four days later of an injected ricin-filled pellet. That is a fascinating story which I found on Wikipedia.

All parts of the castor bean are poisonous, but the high amount of oil in its seeds allows plants being grown and cultivated for making things like castor oil, lamp oil, soap, and medicine. 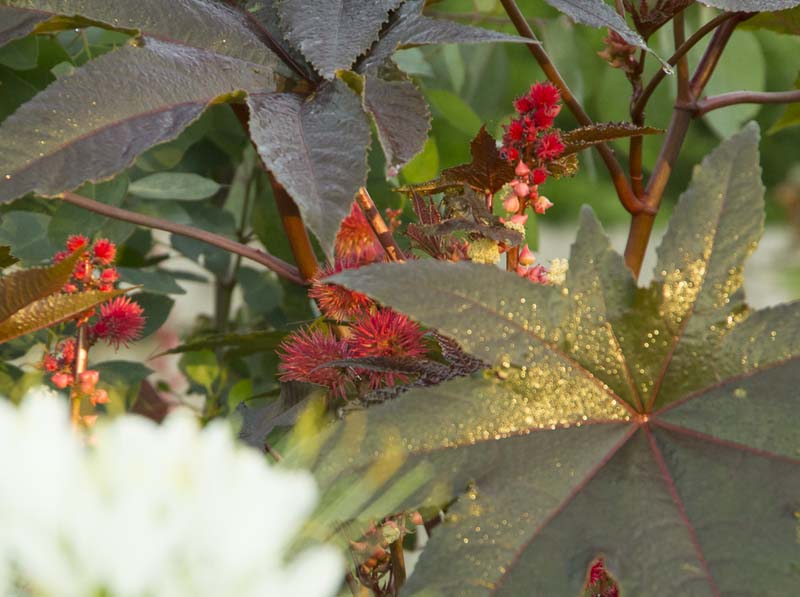 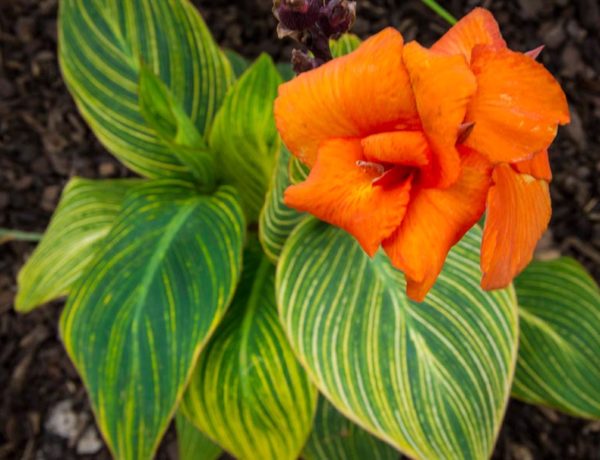 GLIMPSE FROM MY TEXAN GARDEN EASTER 2015 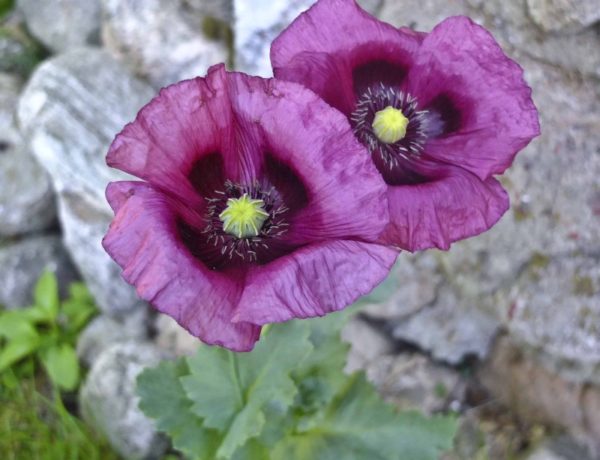 HOW TO GROW HERBS IN TEXAS?